FREE SHIPPING ON ALL ORDERS WITHIN SWITZERLAND
Top

Yayoi Kusama in the Lands of the Smurfs

This is the imag inary story of Yayoi Kusama visit ing The Smu rfs village Yayoi grew up in Japan and dreamt of becoming an artist In the flelds of her family nurseries, she drew flow ers and plants and stones She imag ined the world around her as streams and clusters of dots

In one of her dreams, she decided to visit The Smu rfs village as she was so fond of the red and white polka dotted mushroom house, and she was a big fan of Smurfet te There she discovered a different life beyond the silk kimonos and the mountains, far from Matsumoto City where she carne from. She walked in the flelds of flowers, looked closely at pebbles and drew them as chains of tiny cells that lookedlike dots. She became devoted to her dots as for her, they were a way of thinking about the world among the stars

In her dream, she enJoyed spending time with Smurfette, amused by her feminine featu res, blue skin colour, long yellow hair, lon g eyelashes and her white dresses and white high heels. She lookedat the Smurfs dancing and the swirling night skies, trying to solve their issues with Gargame l as if they were puzzles Later on she got inspired to make her red and white polka dots patterns as well as the famous Accumulation chair inspired by the smurfs” hats

Pars Mei part of me – part of our future 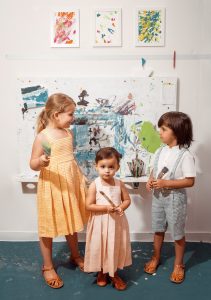